Rice is truly one of the pillars of Asian cooking. Are you looking for new ways to cook with this beloved ingredient? Find inspiration, here. 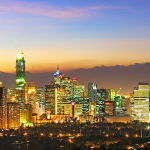 If there’s one ingredient that binds Asian cuisine together, it’s rice. This ubiquitous grain, which is one of the most consumed foods around the world, has been a staple of Asian cooking for generations. Those who grew up in Asia consider rice as an everyday meal, a reliable comfort food and an important part of special occasions.

Growing up in a Filipino household, family meals would feel incomplete without that steaming mound of white rice on our dinner table, not so much a side dish, but a family favourite in itself that made our meals seem even more appetising.

What Are Some of the Most Delicious Ways to Cook with Rice?

Whether it’s steaming, stir-frying or simple boiling, the delicious flavour and texture of rice can bring life to many kinds of recipes. But it can hold its own as a delicious one-meal dish.

Here are some of our favourites!

Much like chicken fried rice, this tasty Asian favourite takes just a few minutes to toss together. To start, simply saute onions and fry an egg, then stir-fry in a few cups of cooked rice that’s been made more flavourful by being boiled in salt, water, and soy sauce. 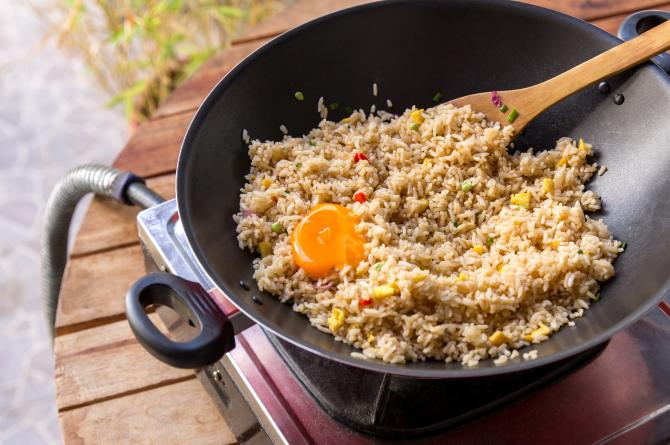 Learning how to cook with riceis an important skill for anyone who wants to sharpen their Asian cooking skills. | image: shutterstock

Also known as rice porridge or a variation of lugaw, this is one Filipino take on the comforting Chinese congee. To make this dish, boil rice in water after sautéeing it in a variety of flavourful ingredients and seasonings, such as ginger, garlic, onion and chicken strips. You can have it plain or topped with a boiled egg.

Also known as puffed rice, this is a popular snack food in the Philippines. Much like rice krispies, these bite-sized nibbles have a crunchy and sticky texture.

To make ampaw, two rounds of sun-drying are usually required. But the easier way involves melting butter, corn syrup and brown sugar, and boiling the rice puffs in the resulting sweet glaze. 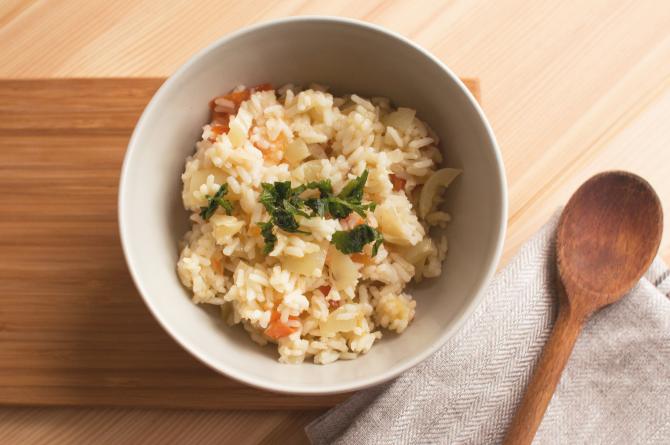 Though not the most popular way to cook with rice, Asian risotto is definitely a must try! | image: shutterstock

This take on an Italian favourite might not be the most well known Asian rice dish, but it definitely deserves a spot on this list. It takes a little over an hour to make, by simmering and stir-frying chicken thighs, chicken stock, risotto rice, carrots, curry powder and other spices. Intrigued?

This easy rice recipe is done mostly by stir-frying eggs in vegetable oil before cooking the sliced chicken rice, peas, and carrots separately. After a few minutes, add in the shredded fried eggs and diced green onions. This dish is made more flavourful by seasoning it with salt and soy sauce.

Also known as Chinese rice porridge, this staple comfort food is one of the easiest and tastiest ways to cook with rice. All it takes to whip up a bowl of this hearty soup is boiling and then simmering some rice in chicken stock somewhere between an hour or two, while stirring occasionally. Once thick in consistency, season the broth with a savoury soy sauce-sesame oil mixture.

Commonly served in India and Nepal, this spice-filled, savoury one-meal dish is made by cooking lentils and rice in aromatic ingredients. Though the ingredients vary per region, it generally includes ginger, chilli, onions, curry, and cumin. 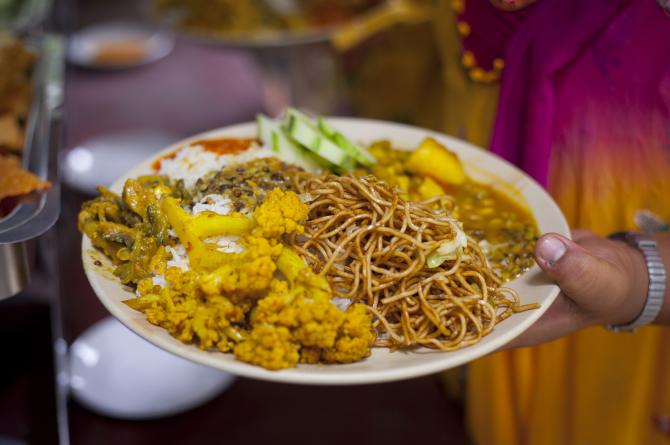 Look for a spicy, savoury way to cook with rice? Dal bhat will definitely hit the spot! | image: shutterstock

Favoured as a great way to make use of leftovers, this dish is simple, tasty, and can complement a variety of Asian dishes. Best of all, it takes less than 15 minutes to make. To make garlic fried rice, simply stir-fry rice in sauteed garlic, and season as desired with salt and pepper. Some even prefer to melt in some butter to make it more hearty and filling.

Here’s another variant of the lugaw or rice porridge. Much like arroz caldo, goto or beef congee is a Filipino favourite breakfast food (or comfort food at any time of day). But unlike arroz caldo, which makes use of chicken strips for added flavour, goto is made more hearty by beef tripe or pork innards, as well as eggs, spring onions, and chicharon.

For those who love the kimchi, this will truly be a treat. The spicy pickled cabbage gives this dish its bold flavour. When topped with a fried egg—some even add bacon to add texture and flavour—it becomes a sumptuous meal. Much like other types of stir-fried recipes on this list, kimchi fried rice is a great way to make sure leftover rice does not go to waste. 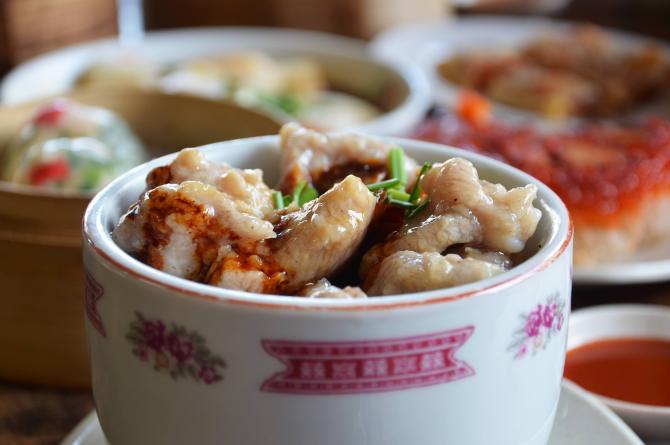 Though typically considered dim sum, bamboo steamed pork rib rice is one of the tastiest ways to cook with rice! | image: shutterstock

This steamed dish is more popularly considered dim sum, but the cooking process actually involves steaming the pork ribs and the rice at the same time, making it a great way to cook with riceas well as an easy one-meal dish. The entire process takes about an hour and a half.

To make this famous Indonesian breakfast food, begin by submerging glutinous, cylindrical rice cakes in a coconut milk-based vegetable stew. Lontong Sayur can be enjoyed as a breakfast meal as well as a midday snack. This savoury dish takes about an hour and a half to make. These rice cakes also make a good ingredient for a street food favourite of many called ketoprak.

There’s more to miso soup than just being served as an appetiser in Japanese cuisine. It can be used to make mains, like this dish, which is made by pouring miso over rice, making a savoury, fragrant, and filling broth. There are a variety of ways to enjoy this dish: by adding poached eggs, or peas with carrots and shredded chicken strips.

Also known as Basil and Pork Stir-Fry, this street food is one of the local lunch favourites in Bangkok. But you can also easily make this at home! This tasty dish, which can also include chicken or beef, is made by stir-frying meat in a garlic chilli paste and served with rice on the side and topped with wilted basil as well as a warm, runny egg. 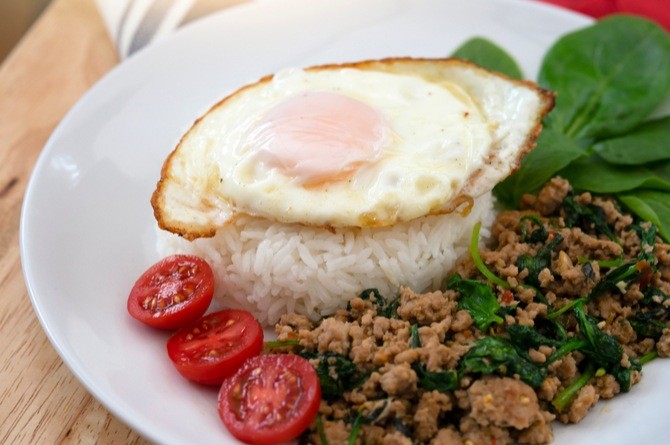 Though a popular street food, this Thai favourite is also a great way to cook with riceat home! | image: shutterstock

Also referred to by some as Asian chicken and rice bake, this hearty and creamy dish is made by mixing all the ingredients—soy sauce, vinegar, garlic powder, paprika, rice, boneless chicken breast—in a dish and baking for about 45 minutes.

Visit any mamak food stall in Malaysia and Indonesia and you can get your nasi goreng fix, along with anything nasi, really, like nasi kuning (turmeric rice) or nasi kuning (coconut steamed rice). Nasi goreng is made by tossing leftover rice in soy sauce, meat, seafood, veggies and topping it off with a fried egg. 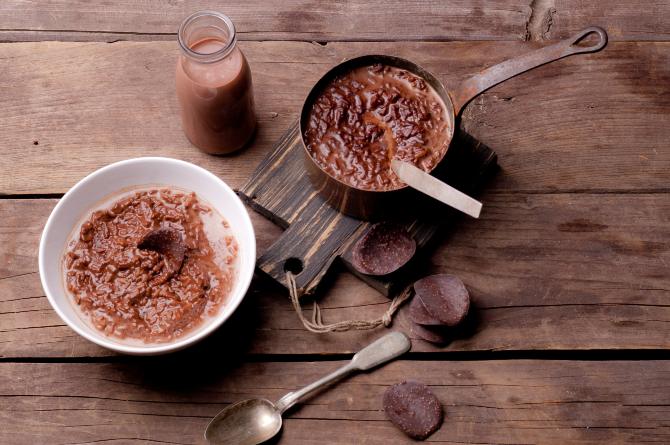 This Filipino favorite is one of the most delectable ways to cook with rice. | image: shutterstock

Though one of the lesser known ways to cook with rice, champorado is a Filipino comfort food that is definitely a must try. Though there are instant varieties on the market, nothing beats the rich flavour of making it from scratch. Chocolate porridge is typically made using tablea (pure chocolate), glutinous rice, sugar, condensed milk or powdered milk, and water.

This easy-to-make one-pot dish is a great way to use up leftovers, but is also a special dish served during special occasions. A staple of Indian and Pakistani cuisine, this dish, typically made using basmati long grain rice, owes its distinct aroma and flavour to a variety of ingredients, like turmeric, yogurt, cinnamon, cumin, cardamom, mint, and curry paste.

This rice porridge is also known as Vietnamese congee. A morning favourite, this filling Asian dish, is also a staple comfort food that can be served at any time of day. It is also versatile, in that it can be prepared with white, brown, or red rice and cooked with chicken or fish. 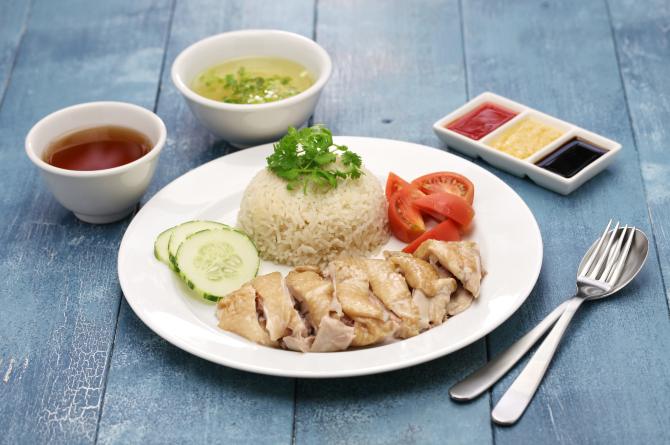 One of the most beloved ways to cook with rice, particularly in Singapore, is by making Hainanese Chicken rice. | image: shutterstock

Beloved as Singapore’s national dish, this healthy and filling meal owes its rich flavour to the chicken as well as the rice that’s been boiled in an aromatic chicken stock. Though this steamed dish takes numerous ingredients and over two hours to prepare, it will be well worth the wait.

Also known as Korean chicken porridge, this comfort food is made by simmering seasoned chicken until cooked and adding the rice, which is stirred until smooth. Other variants of juk include pat juk (red bean porridge), jat juk (pine nut porridge), and hobak juk (pumpkin porridge).

Onigiri, or Japanese rice balls, is not exactly a way to “cook with rice,” but it deserves a spot on this list because it’s one of the tastiest and flexible Asian rice dishes out there. Best enjoyed as a quick snack or lunch, onigiri is made by stuffing sticky, steamed rice with a variety of fillings, like salted salmon, tuna with mayonnaise, or pickled plum, then wrapping it all up in a tasty sheet of seaweed (nori). 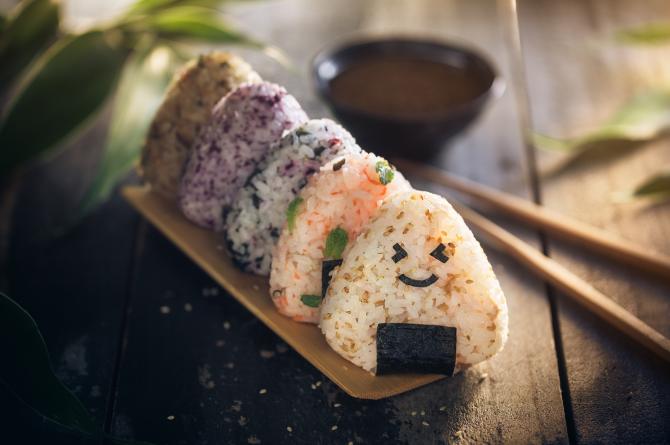 Quite possibly the most kawaii way to cook with rice, onigir can make for a quick snack, or even main meal, at any time of day! | image: shutterstock

There’s nothing quite as soothing as an aromatic, hearty broth and this dish definitely hits the spot. Made with long grain rice in a ginger beef broth, this comfort food takes less than 30 minutes to whip up.

This Thai delicacy is made by frying rice in shrimp paste. It is commonly served for lunch as a variant of fried rice. What makes it even tastier? Topping it with green mango, cucumber, shallots, shrimp, chillies and strips of scrambled eggs.

Another Thai take on fried rice is Khao Phat, which makes use of brown rice stir-fried in an array of veggies and drizzled with lime juice. 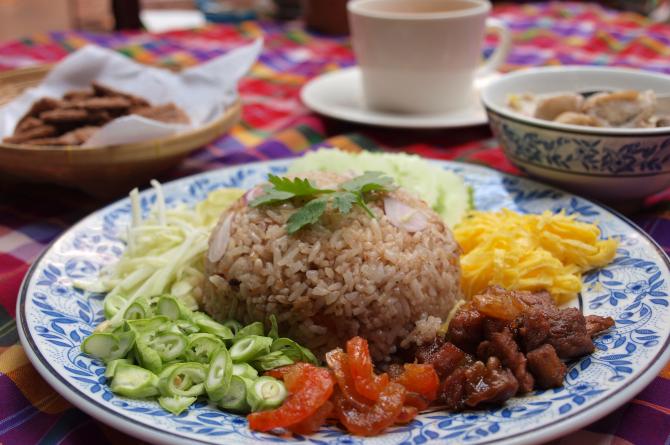 Khao Kluk kapi is one of the tastiest ways to cook with rice, particulary in Thailand. | image: shutterstock

One of the more popular ways to cook with rice, Yeung chow fried rice is a staple of Chinese restaurant menus worldwide for a reason. It’s tasty, filling, and complements a variety of dishes in Chinese cuisine and beyond. Though usually served as a side, it becomes a meal in itself because of its filling ingredients, green peas, ham slices, shrimps, shredded eggs, and more.

A similar japanese dish that’s both light and filling is Ochazuke. This dish consists of steamed rice bathed in green tea and sprinkled with nori, rice crackers, or salmon. However, unlike Ochazuke, Zosui can be a meal in itself instead of just a quick snack.